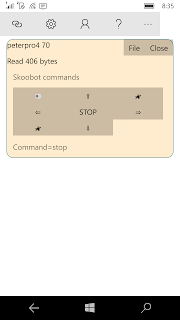 1. Links (Gopher menu entry type 1) can be set to be INLINE, at which point they are called BUTTONS
2. The INLINE style is added to column 5 (which is also where the Gopher-plus "+" is added).
3. The INLINE style is part of a list of styles (e.g., "BLUE;INLINE") where styles are split with a semicolon (;). Never put a space in (it's "BLUE;INLINE" not "BLUE; INLINE")
4. Multiple BUTTON items can be placed on the same line if the client wants to.
5. The first menu entry from a button result will replace the first non-button item in the original menu. This means that you can have a block of buttons followed by a single data element.
Posted by Sunrise Programmer at 8:53 AM No comments: