Number 2 in a series on Wi-Fi performance. This time, Wi-Fi (and networking in general) is compared in difference places is compared. Sneak preview: Bluetooth PAN is the slowest :-)

I ran a simple speed test and gathered latency information (round-trip UDP times) in a variety of places and network. No surprise, Ethernet is the fastest and Bluetooth is the slowest. Airport Wi-Fi had generally high throughput (it's higher throughput than my house Wi-Fi network, although note that I have fiber with a low bandwidth cap) but with medium latency.

Bluetooth PAN (Personal Area Network) is a technology that lets you share an internet connection from one laptop to another using Bluetooth instead of Wi-Fi. I'm not quite sure why people would do this, but it's still supported in Windows. It's got a non-winning combination of low speed and high latency.

1. On the "host" laptop, open the Mobile Hotspot settings, and share your Wi-Fi (or Ethernet) connection with Bluetooth.

2. On the "using" laptop, you need to get to the PAN settings page. AFAICT, there's only one way to do this:

Posted by Sunrise Programmer at 7:47 PM No comments:

Wi-Fi: Is it faster on AC? Is it slower on Battery?

One of a series of comparisons to learn what makes a difference in Wi-Fi performance.

TL/DR: they aren't difference, at least on my setup.
In the screenshot, I've done several latency, download, and upload tests against one specific server.
Test methodology: With the laptop plugged in, run all the speed tests twice with "AC" as the note. Then remove the docking station (the part that is plugged in) and run the same tests against the same server and mark them "DC".
Data Analysis:
Conclusion: Wi-Fi is about the same speed on DC as it is on AC.
Posted by Sunrise Programmer at 1:29 PM No comments:

Quick background: my Simple Wi-Fi Analyzer program is getting a hidden feature which is unlocked by manipulating the UX in a secret way. I won't say what the secret is, but you can always look for "Unlock" in the source code :-)

The Analyzer app uses the nice Pivot control: I define a bunch of tabs for different features, and the user picks the tool they want to use. The new feature is a hidden tab, and my unlock code simply unhides it.

Except it doesn't. You can't actually hide a PivotItem in a Pivot control; it's not supported. Instead you have to create the PivotItem in code and then add it to the pivot.Items collection, it is shows right up!

Except you actually get this Vista-era dialog: 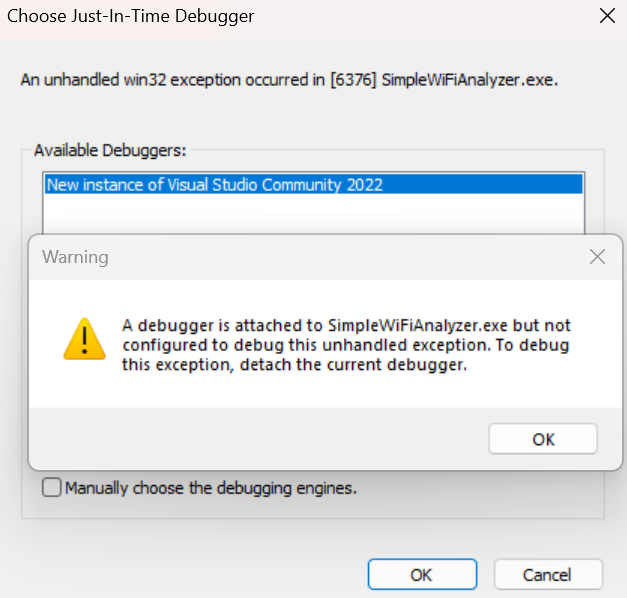 The problem (not even on Stack Overflow) is simple: you can't update a pivot.Items collection while you're in a PivotSelectionChanged callback! The solution is to

You don't have to wait for the task; it will just run when it's appropriate.

Posted by Sunrise Programmer at 4:51 PM No comments:

The "classic" formulas aren't always the "easiest to program" formulas. Let's look at the classical formula to calculate a sample standard deviation:

where σ is the standard deviation, x̅ is the mean and n is the sample count. But note that we have to walk through the numbers twice: once to calculate the mean, and then again for the rest of the calculations. And yet, old fashioned scientific calculators with just a handful of registers (memory locations) could do this calculation by just entering in a column of numbers. What gives?

The answer is that although conceptually you are summing the square of the difference between each sample and the mean, you can actually do the calculation differently as long as you can keep track of n, the sum of x, and the sum of x². The resulting calculation is:

or, slightly more computery: for each new x:

And you get a running estimate for the standard deviation. You also get the variance, but that's not often really needed.

Statisticians call these the "estimates" because the statistical theory is that there's a magic, universal reality for the actual population variance and standard deviation for which these samples provide an estimate. They aren't wrong :-)

Posted by Sunrise Programmer at 3:28 PM No comments:

The information (i) element isn't any part of the Gopher RFC (most of Gopher is part of RFC 1436, and the Gopher URL is documented in RFC 4266), and therefore neither is the common practice of putting displaying an information element differently when a TITLE is put into the directory entry selector.

Thanks to a GopherSpace crawl, I know that out of about 2100 menus crawled, there were 305 information elements with a TITLE on them -- that's actually a pretty impressive percentage, and presumably it's driven by automated Gopher menu file creation. I'm wondering, though: as the programmer for a Gopher client, how many different Gopher client will render the TITLE elements specially? For that matter, how many Gopher pages put something into column 5, where the "+" in Gopher+ puts the Gopher+ indicator?

(I know that the first version of my own doesn't because I didn't know about the TITLE concept).

Let's start by analyzing pages that have too many columns (e.g., more than 5 columns, which corresponds to having more than 4 embedded tabs). There are five such directory entries in my GopherSpace crawl. Three are from a single page which, when I looked at is, is really an HTML page that's being served up as if it was Gopher. Of the remaining two entries, one has a user string consisting of three tabs instead of real data, and the other (from a different menu) has three tabs too many at the end of the line but and doesn't have any actual data in the columns.

We can also analyze the number of columns in directory entries 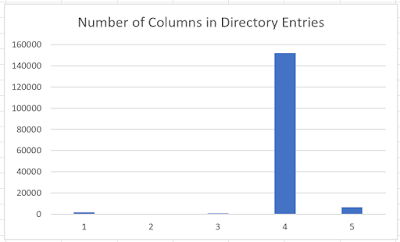 Almost all of the Gopher directory entries are the standard four columns. You can hardly tell the actual numbers, but 1907 entries were a single column, 9 were 2 columns, 895 were three, and 6590 were 5. There were 151840 entries with 4 columns.


Posted by Sunrise Programmer at 8:41 PM No comments:

This is a story of porting C++ code using all the latest features to a machine whose compiler was (ahem) definitely not supportive of advanced features :-/

Back in about 1997 and 1998 I was a software consultant and got hired by an old coworker at Avid to help them port their shiny new high-performance file-copying software to the Irix. IIRC, they had written it in “portable” C++ which I discovered was anything but ☹

Writing code with no strings attached

Amongst the other delights of 1997 era SGI workstations: SGI was a leader in creating the C++ STL. But the SGI people really, really didn’t like the proposed STL string types, so they just … didn’t. One of the many, many steps on my journey to porting this code was to create enough of a string class to compile.

Other issues were that vector<> wasn’t compatible either, so I had some lovely #ifdef’s in the code.

What's in a namespace? Nothing.

The compiler also didn’t handle namespaces; they were read in an ignored. For most code this was a minor inconvenience, but the people writing this “portable” C++ code were a different breed. They had many, many classes with the same name and similar but different functionality. My solution was to create enough of a C++ “parser” to re-write the code. Turns out that if you ignore enough of the rules, you can make a C++ parser with just Lex 😊

But the absolute worst part was that the “portable” C++ code used both multiple threads (typical for networking code) and exceptions (still a new thing). The SGI compiler (which was the only compiler – I did a thorough look to find anybody else with a compiler) could handle threads, and could handle exceptions, but created incorrect binaries when dealing with both. And it didn’t matter if you threw any exceptions; the generated code was wrong regardless.

My simple solution was to note that every single exception was uniformly caught exactly one level higher, and that none of their code ever returned a value. So I just made the exception-throwing methods return a value, instead. Simple, quick to implement and IMHO made the code a little nicer looking. This solution was rejected.

The alternative solution was to use processes instead of threads. A “thread spawn” became a “process spawn”. And not just a process spawn: a process spawn all of the processes sharing their C++ memory so the data structures should be shared (and mutually updated, meaning using cross-process mutexes).

This was an unglodly heavyweight project. But the pay was very nice.

Moral of the story: never outrun your compiler?

Posted by Sunrise Programmer at 8:40 PM No comments:

Your Bluetooth is bad, January 2023 edition

Your Bluetooth protocol is bad, January 2023

I've finally gotten over a big hump in my Bluetooth Device Controller program -- I've been poking around with adding and fiddling with devices, and that means that the code has been getting much more "experimental". That's not a good thing for an app that I ship, and which has over 35 thousand downloads! I've been working hard to convert the experimental code into an app that people can use without too much frustration.

With that, it's on to the next installment of this series on crappy Bluetooth protocols, focused on the Govee line of air sensors. The version 1.10 app supports the Govee 5074; the next version (presumably 1.11) will support the 5075 and 5106. All of them suffer from the same three flaws, and the 5106 has a unique and fun new flaw.

Don't shut off communications too early. All of the Govee devices like to shut down their Bluetooth connections really fast -- after about 4 seconds, they shut down the connection even if you've been talking on it. Other devices will wait until the connection has no traffic before shutting down.

Just transmit your freaking data. If you provide data, just provide it: make a characteristic, and make it readable and notifiable.

Don't fold multiple values into decimal values. This is harder to explain. The Govee Air Sensor, as an example, sends out temperature, humidity, and air quality data in a single advertisement. But instead of just filling in 3 two-byte integer values, they instead take the temperature and multiple by 1_000_000. Then then take the humidity and multiple by 1_000. Then they add the air quality. This is all written as a single 4-byte integer.

To decode this monstrosity, you have to read in the 4-byte unsigned integer (in big-endian mode, even though Bluetooth is mostly little-endian). Then do a weird combination of MOD and integer divide operations to split out the three numbers.

Use the right Manufacturer code. The Govee devices mostly use a made-up EC88 manufacturer code; this is an unassigned value that nobody should be using. But the 5106 Air Quality monitor, for no apparent reason, uses the Nokia Phone code (they are manufacturer #1).

Each Bluetooth LE device can provide a set of connection parameters. These are decoded (now) by the Bluetooth Device Controller; they are part of the "Connection Parameters" (2A04) characteristic of the "Common Configuration" service (1800). The timeout is the last two bytes in little-endian format. For example, if the last two bytes are "90 01" in hex, that's 0190(hex) which is 400 (decimal). The value is in 10s of milliseconds, so the 400 (decimal) means 4 seconds for a timeout.
Looking at my device library, common settings here are:

Posted by Sunrise Programmer at 5:34 PM No comments: